Tonight, the Legacy of Brutality is in 6-man action against the team of Kal Herro, Dustin Jackson, & Rush Champion Star Rider! The Tag Team Champion Tate Twins face off with the Box Office Blonds! Plus, women’s action featuring Dani Mo vs. the debuting Sierra and Arie Alexander vs. Charlie Kruel, and much more! 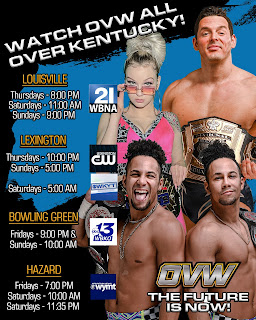 For ways you can watch OVW TV in the Kentucky area, take a peek at the banner above. Plus, you can see OVW Thursday nights on FITE TV, Fridays at Midnight on YTA, and on several streaming platforms! If you can’t find OVW TV, you ain’t looking hard enough!
Without further ado:
Here we go… “Shotgun” Tony Gunn vs. “The Soldier” Garrisaon Creed.
Gunn goes right after Creed and clubs him down in the corner. He trips him off the ropes and hits his head off the apron. He rolls Creed back in and hits the springboard knee to the face. He kicks Creed and locks him up to club him across the chest. He has Creed locked in a submission. Creed works his way up and kicks Gunn in the head. He hits a twisting suplex for 2. Gunn clubs him again, but Creed comes back with a roundhouse kick. Creed fires up and catches Gunn with a kick to the midsection. Creed with a knee to the face and dropkicks Gunn into the corner. Creed charges in, but Gunn rolls out of the way and catches him with the Killshot for the 3.
WINNER: GUNN by pinfall. 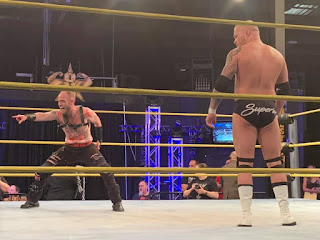 “Superior” Tony Evans vs. “Satan’s Favorite Sinner” Amon.
Amon smacks Evans in the face. Evans replies with a hard clothesline and pounds Amon on the mat. Amon drops him into the corner and stomps him. He hits a jumping clothesline off the middle rope. Amon clubs him across the chest, then chokes him in the ropes. Evans back with some offense, but Amon comes back with some hits and leaps off the top. Evans catches him. He takes him down, but Amon pops back up. He kicks Evans and goes for the STH, but Evans blocks it and hits crossroads for the 3.
WINNER: EVANS by pinfall.
OVW TV (HOUR 1):
Bryan Kennison & Steven Johnson are on commentary, Eric Cornish is the ring announcer. 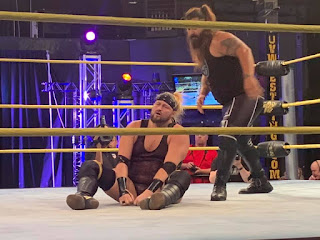 “The Mayan Mauler” Drew Hernandez vs. “The King of Spade” Joey Avalon.
Joey plows Drew down and uppercuts him in the ropes. Drew catches him with a spinebuster and kicks him. Drew rakes the eyes and pounds away on Joey in the corner. Drew with an elbow across the back. He stomps Joey in the midsection. He stomps him again, then hits him. Joey tries to fire back, but Drew hits him down. He sets up for the big shoulder tackle, but Joey with a back body drop. He fires away on Drew and uppercuts him in the corner repeatedly. Joey gets a throat thrust from Drew, then Drew catches him with a pop up powerbomb off the ropes for the 3!
WINNER: DREW by pinfall. 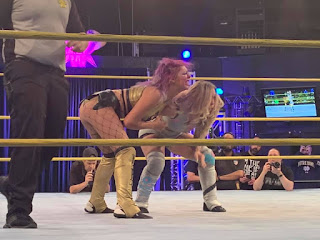 Charlie Kruel vs. “Double A” Arie Alexander.
Kruel with all the offense early. She takes Arie down into the corner and knees her in the face. She hits a double knee to the face, then jumps across Arie’s back in the ropes. Arie comes back with a German suplex and kick to the face. She snapmares Kruel and kicks her in the gut. Roundhouse kick and Arie plants Kruel with a DDT for the 3.
WINNER: ARIE by pinfall. 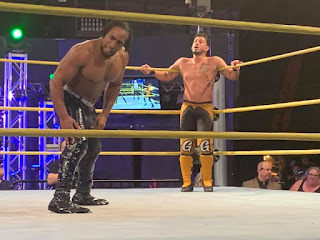 “The Nephilim” D’mone Solavino vs. Gustavo.
Back and forth contest. D’mone gets Gustavo locked up in the ropes, injuring his knee. D’mone works over the leg and goes for the Figure Four, but Gustavo rolls him up in a small package for the 3.
WINNER: GUSTAVO by pinfall.
After the match, D’mone hits Gustavo over the barricade. 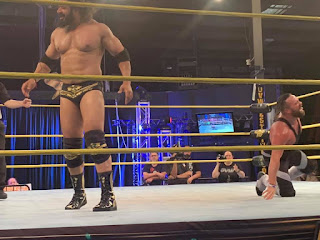 “Picture Perfect” Jordan Kage vs. “The Indian Lion” Mahabali Shera.
Kage takes his warm-up pant off and throws them at Shera and fires away. Shera hits him back and delivers a huge back body drop off the ropes. Kage with a dropkick. Shera reverses a throw to the corner. Kage with a drop toehold into the turnbuckle and stomps him. Shera pops back up and clotheslines and slams him. Kage slides out of a chokeslam and kicks Shera low, then hits a knee to the face. Shera comes back and catches Kage with the Sky High for the 3.
WINNER: SHERA by pinfall.
Is there anyone that bet against Shera in the Kentucky Title Tournament? He looks unstoppable! 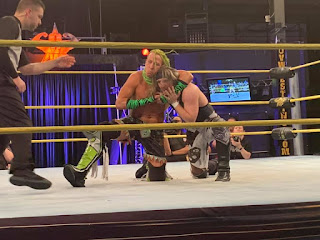 William Lutz vs. “The Neon Ninja” Facade.
They lock up and exchange holds. Facade hits a flipping arm drag off the ropes. Lutz rolls out and Facade gets on the apron. Lutz pulls him down and gets back in and slams him. He misses a reverse cross body off the ropes and Facade covers for 2. Lutz comes back and nails an overhead neckbreaker for 2. Lutz with a spike slam and goes for the moonsault. Facade moves and hits some chops and kicks to Lutz. He hits a kick to the face and Lutz goes to the floor again. Facade leaps out with a flipping dive! He gets back inside and Lutz slowly makes it back in before the 10 count. AJ Daniels comes out and Facade takes him down and pounds away on him. AJ rakes his eyes and pounds on Facade, choking him with his foot across the throat.
NO CONTEST.
I’d be willing to bet Facade is looking to get AJ in the ring soon for a 1-on-1 encounter! 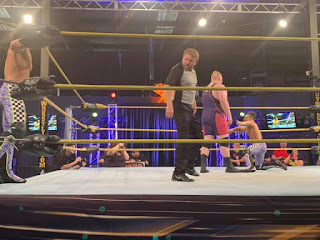 NON-TITLE MATCH: “The Box Office Blonds”: “Hollywood” Adam Swayze & “Co-Star” Rex vs. Tag Team Champions “The Tate Twins”: Brandon & Brent.
Adam is calling the shots from his director’s chair on the outside as Rex starts out. The Tates try to use their speed to keep Rex off balance. It works to a certain extent, before a hurricanrana gets caught and Rex delivers a huge sidewalk slam. Rex squashes Brent in the corner, but misses a big legdrop. Brandon gets a hot tag and hits Adam off the apron, then delivers several dropkicks to Rex. He tries a sunset flip. Rex drops, but Brandon has moved. Brent tags back in and they hit a double eat de-feet. Double shoulder block, then a double clothesline takes Rex down for 2. He powers out with BOTH Tates covering! Rex with a double chokeslam. Adam tags in and covers Brent for the 3!
WINNERS: BLONDS by pinfall.
Does this win move the Blonds up in the tag team rankings for the next title shot?
OVW TV (HOUR 2):
Steven Johnson & Bryan Kennison are on commentary, Eric Cornish is the ring announcer. 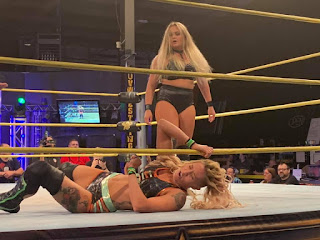 Sierra vs. Dani Mo.
Sierra with most of the early offense. She hits a running knee to the face and a backdrop for 2. Dani back with a kick to the back after sliding off Sierra’s back and running her into the corner. Dani with a big scoop slam to get the 3.
WINNER: DANI by pinfall. 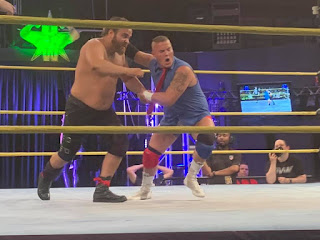 Brandon Espinosa vs. “The Candidate for a Brighter Future in Wrestling” Koda Jacobs.
Espy attacks Koda and chokes him with his tie. Koda comes back and takes control and works him over with hits and kicks. Espy kicks Koda and he falls head first into Espy’s knee on the mat. Espy with a brainbuster DDT for the 3.
WINNER: ESPINOSA by pinfall.
We see Tony Bizo & Haley J going out on a date in a limo.
SUPER HEAVYWEIGHT CHALLENGE: “Big Money” Dimes vs. ?.
Dimes says they are out of super heavyweights in the back. He scans the crowd for someone to fight, then lands on Ms. Stephanie at ringside. She gets in the ring, but AJ McKay stops her and says she is not a licensed wrestler. Dimes delivers a Change Maker to AJ.
We see more of Tony Bizo & Haley J’s date night out on the town. 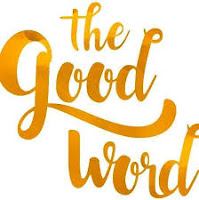 Reverend Ronnie Roberts is out for the Good Word. He says his first round matchup happens next week. 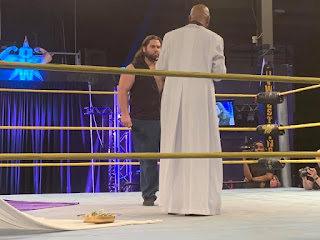 Tom Coffey is tonight’s special guest. Tom is the Reverend’s opponent for next week. Ronnie pokes fun of Tom’s weight. Tom says he has something to add to the collection plate…his hospital bill! He attacks Ronnie from behind and smacks him in the face. 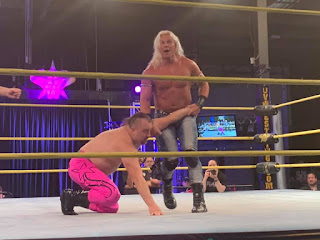 “Mr. 5-Star” Gary Gandy vs. “Rockstar” Ryan Howe.
Howe controls most of the match. He works over the arm for the Whammy Bar, but ends up hitting the inverted atomic drop, rock ‘n’ roll fistdrop, and neckbreaker drop for the 3!
WINNER: HOWE by pinfall.
We see more of Tony Bizo & Haley J’s date night out on the town, then Luscious Lawrence being upset and destroying the backstage area. 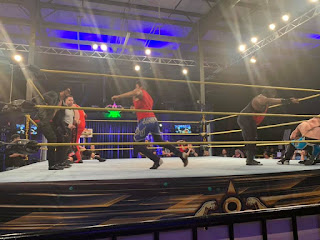